Topic Maps is a standard for the representation and interchange of knowledge, with an emphasis on the findability of information - wikipedia 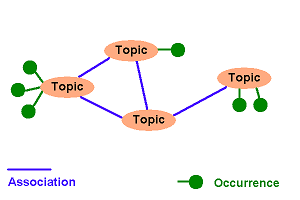 Illustration of how the three key concepts relate in the Topic Map standard. These are topic, association and occurrence. c pouri - wikimedia

Topic maps were originally developed in the late 1990s as a way to represent back-of-the-book index structures so that multiple indexes from different sources could be merged. However, the developers quickly realized that with a little additional generalization, they could create a meta-model with potentially far wider application. The ISO standard is formally known as ISO/IEC 13250:2003.

# Ontology and merging Topics, associations, and occurrences can all be typed, where the types must be defined by the one or more creators of the topic map(s). The definitions of allowed types is known as the Ontology of the topic map - wikipedia

Topic Maps explicitly support the concept of merging of identity between multiple topics or topic maps. Furthermore, because ontologies are topic maps themselves, they can also be merged thus allowing for the automated integration of information from diverse sources into a coherent new topic map. Features such as subject identifiers (URI (Uniform Resource Identifier)s given to topics) and PSIs (''Published Subject Indicators'') are used to control merging between differing taxonomies. Scoping on names provides a way to organise the various names given to a particular topic by different sources.