The War on Drugs is an American term usually applied to the United States government's campaign of prohibition of drugs, military aid, and military intervention, with the stated aim being to reduce the illegal drug trade.

The US spends approximately $500 million per year on aid for Colombia, largely used to combat guerrilla groups such as FARC that are involved in the illegal drug trade - usaid.gov 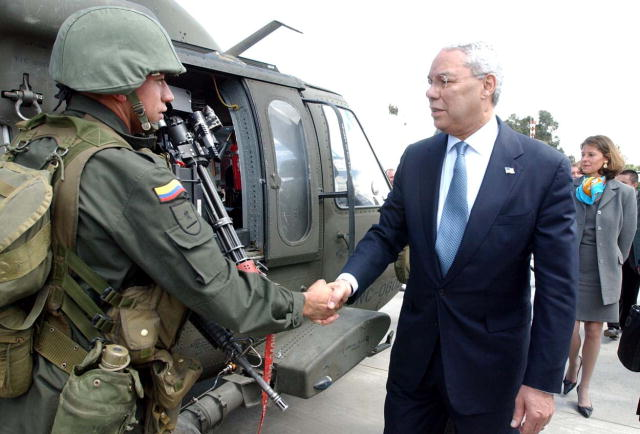 This initiative includes a set of drug policies that are intended to discourage the production, distribution, and consumption of psychoactive drugs that the participating governments and the UN have made illegal - wikipedia

The term was popularized by the media shortly after a press conference given on June 18, 1971, by United States President Richard Nixon—the day after publication of a special message from President Nixon to the Congress on Drug Abuse Prevention and Control—during which he declared drug abuse "public enemy number one".

That message to the Congress included text about devoting more federal resources to the "prevention of new addicts, and the rehabilitation of those who are addicted", but that part did not receive the same public attention as the term "war on drugs".

However, two years prior to this, Nixon had formally declared a "war on drugs" that would be directed toward eradication, interdiction, and incarceration. Today, the Drug Policy Alliance, which advocates for an end to the War on Drugs, estimates that the United States spends $51 billion annually on these initiatives

On May 13, 2009, Gil Kerlikowske—the Director of the Office of National Drug Control Policy (ONDCP)—signaled that the Obama administration did not plan to significantly alter drug enforcement policy, but also that the administration would not use the term "War on Drugs", because Kerlikowske considers the term to be "counter-productive". ONDCP's view is that "drug addiction is a disease that can be successfully prevented and treated... making drugs more available will make it harder to keep our communities healthy and safe". One of the alternatives that Kerlikowske has showcased is the drug policy of Sweden, which seeks to balance public health concerns with opposition to drug legalization. The prevalence rates for cocaine use in Sweden are barely one-fifth of those in Spain, the biggest consumer of the drug.

In June 2011, the Global Commission on Drug Policy released a critical report on the War on Drugs, declaring: "The global war on drugs has failed, with devastating consequences for individuals and societies around the world. Fifty years after the initiation of the UN Single Convention on Narcotic Drugs, and years after President Nixon launched the US government's war on drugs, fundamental reforms in national and global drug control policies are urgently needed." The report was criticized by organizations that oppose a general legalization of drugs.